Teesworks is a 2,600 acre industrial site, located on the South Bank of the River Tees. It is the third largest river port within the UK.

For over 100 years the site had been used by British Steel, TATA, SSI and other large companies for the production of steel and heavy industrial manufacturing. In years gone by, the site employed over 5,000 people and thousands more as part of the supply chain – it was a ‘hub’ of industrial activity and a world leader in steel quality.

In addition, the chemical giant ICI had two chemical sites at Billingham and Wilton, with other smaller chemical companies operating close to the River Tees. Teesside was once, the chemical capital of the UK and one of the largest chemical producers in Europe.

Shipbuilding was also prominent on the River Tees with Swan Hunter and others building some of the largest ships in the world.

Teesside was built on steel, chemicals and ship building, so much so, that in 1862, the Prime Minister, William Gladstone described Middlesbrough as an ‘Infant Hercules’, due to the rapid growth in heavy industry within the town and the Tees area. Economic growth continued for over 100 years, until the collapse of shipbuilding and then the gradual decline of the steel and chemical industries. As a result, over 35,000 jobs were lost to Teesside during the 1980s, which led to the erosion of the economic and social landscape of the area as a whole.

To some extent, Teesside has not yet recovered from the 1980s, with unemployment and social deprivation still being much higher than the national average. 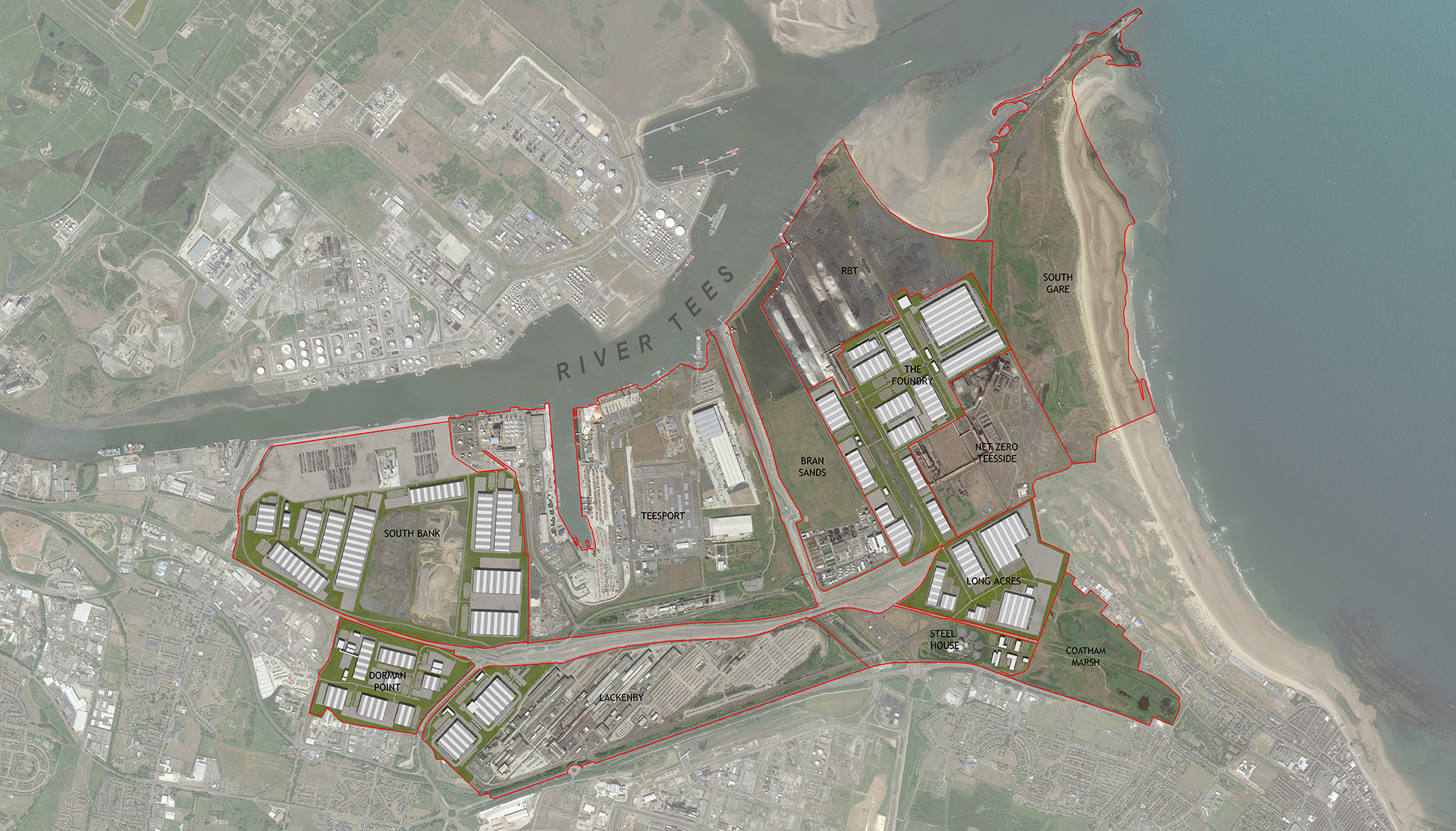 Due to global market forces, one of the last major employers, SSI ceased steel production in 2014, and moved into liquidation. As a result, over 2,000 jobs were lost. The site became vacant and was laden with large metal structures, such as the blast furnace and much of the land was highly contaminated it had endured for more than a century. Whilst there was no realistic prospect of attracting new industries to the site, the Official Receiver and Government were tasked with ensuring that the site remained safe and secure.

It was therefore, fully expected that the MDC would continue to receive Government money for security and safety, as well as finance to kick-star the redevelopment of the site, by carrying out land remediation and demolition of structures, so that the site could be made ‘oven ready’ for the emerging industries, such as the renewable energy sector.

In May 2017, the Conservative candidate, Ben Houchen was elected as the Mayor of the Tees Valley, which resulted in the MDC becoming a formal entity shortly after. It was renamed, South Tees Development Corporation (STDC).

As Ben Houchen’s first term of office unfolded, it was clear that, he and STDC were not content with just keeping the site safe and secure. He had real ambition to return the site to a significant employment location for Teesside, which would help to make the Tees Area the economic powerhouse it once was.

Progress was initially slow, due in the main, to the many land ownership claims, historical rights, as well as the security and safety of the site, all of which, made the legal position extremely challenging. The involvement of three Thai Banks in particular, that were owed large sums of money from the collapse of SSI were still passively blocking the development of the site. Indeed, the three Thai Banks were regarded by STDC and others as the greatest obstacle to the success of the site at that time. In an attempt to resolve the situation, STDC instigated Compulsory Purchase Order (CPO) proceedings in order to purchase the steel works site from the Thai Banks and SSI.

STDC were also aware that on completion of a successful CPO, a delivery partner, who had experience in land assembly, regeneration, remediation, demolition services and utilities would be required to take operational responsibility for the site and become the Joint Venture Partner (JVP) of STDC.

Meanwhile, Chris Musgrave and his business partner, Martin Corney were aware of the offshore Dogger Bank Wind Turbine project and had made progress with SSI to secure 70 acres of land near the Redcar Bulk Terminal facility. Their business plan included a partnership with SSI to help deliver a site that could be used by the Wind Turbine industry to install and service the Dogger Bank project. However, and inadvertently, the business plan had the potential to undermine the CPO of STDC and therefore Chris and Martin faced a difficult decision.

It was clear that they had the choice of either:

a) Agreeing a deal with SSI and advance a plan to regenerate a limited part of the site for new employment and economic growth, which would also in all likelihood, result in STDC losing their CPO application.

b) Join forces with STDC and form a new partnership, which in all probability would result in a successful CPO, enabling the whole site to be developed under one master plan, which would result in many more jobs and economic benefits for Teesside as a whole.

For the greater good of Teesside, Chris and Martin agreed to assist STDC with securing the CPO and the creation of thousands of jobs.

On completion of protracted negotiations with SSI, the three Thai Banks and other interested parties, a deal was sealed on 20 February 2020, just one day prior to the CPO hearing, which resulted in the land subject of the CPO being handed over to STDC.

The deal allowed Ben Houchen and STDC to advance the redevelopment of 2,600 acres of land, with the intention of creating one of the largest renewable energy and carbon capture locations in the world, which will result in 15,000 direct jobs and a further 30,000 indirect jobs over a 20-year period.

Having secured the wider site for STDC, Chris and Martin, and their related companies, including DCS Industrial Limited, became the Joint Venture Delivery Partner of STDC. This resulted in Chris and Martin taking operational responsibility for the delivery of the redevelopment of the site in terms of demolition of structures, remediation of land, utility infrastructure and marketing the site to attract inward investment.

At the time of JVP being agreed, it was Chris and Martin who unlocked the SSI land for STDC, ensuring the majority of the site would not stand vacant for decades. As a result, a 50–50 partnership was created.

To date, notable companies who have been attracted to the site include:-

Both companies are pivotal to creating one of the largest wind turbine fields in the world, located on Dogger Bank, just 80 miles east of Redcar in the North Sea, with the component parts being manufactured at Teesworks and transported by ship from the River Tees to the Dogger Bank location

TEESWORKS was initially a rank outsider, but the site has been transformed in record time, due to the formation and strength of the public/private sector partnership, between STDC and DCS and strong support from HM Government – This led to GE and SeAH’s decision to build their manufacturing facilities on the TEESWORKS site, with construction due to begin in the summer of 2022.

To date, there have been over 60 serious business enquiries, the majority of whom are involved in the renewable energy, carbon capture and green economy.

As an example, TEESWORKS is at an advanced stage with Net Zero Teesside (NZT), who are a collection of industrial, power and hydrogen businesses which aim to decarbonise their operations through the deployment of carbon capture utilisation and storage.

BP, ENI, Total and Equinor are all part of the NZT consortium and it is their intention to create a carbon capture storage facility and also a gas fired power station, which will produce energy in the region of 780 Mega Watts. Construction is expected to begin in 2023 and complete by 2026.

The project will make a significant contribution to NZT and assist the UK to be carbon neutral by 2050.

The River Tees port became a Freeport in 2021, which will further incentivise businesses to locate their operations to the area and will further advance the activity of the Port in the years to come.

Clearly, the site has huge potential and has already received over £200m of Government support for site ‘safety’, land remediation and demolition work. In addition, a further £107m has been invested in building a new 1 kilometre riverside quay, which will cater for the requirements of LM and SW and other importers and exporters of goods. Work on the quay has already commenced and will be complete in 2023.

Notwithstanding, the public sector investment already injected into the site, it is clear that further significant investment will be required in the future to fully develop the site. Whilst STDC have kick started the transformation process, it is the private sector who will be required to inject new investment, so that the location realises its full potential.

To ensure this future investment and also taking into account the significant progress made on the site in record timescales, in December 2021, the JVP agreement was amended to make Chris and Martin and their related companies 90% shareholders, with STDC retaining 10%.

TEESWORKS is clearly a game changer in transforming the economic and social fabric of Teesside, hence the support of HM Government and visits to the site by the Prime Minister, Boris Johnson, the Chancellor, Rishi Sunak and other Cabinet Ministers to check on progress – which is at sprint pace.

Steel, Ship Building and Chemicals were important for Teesside in years gone by, but TEESWORKS is without doubt, the new ‘once in a life-time opportunity, which will help to make Teesside an economic powerhouse.